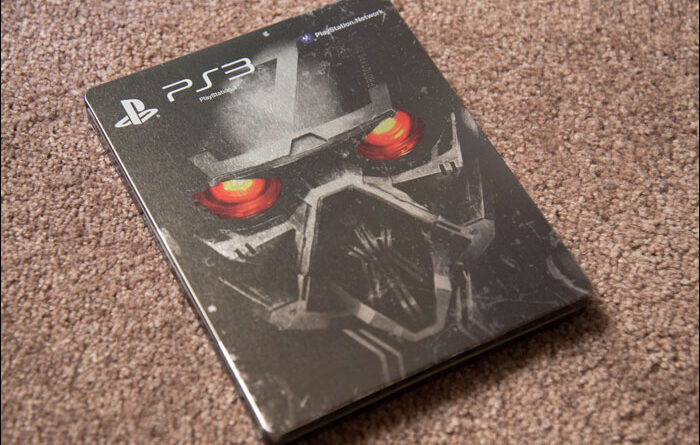 Killzone 3 released exclusively for the PlayStation 3 in early 2011. There were several versions available: the Helghast Edition, which came with an action figure and Helghast helm replica, the Limited Edition, which could only be obtained through contests, and the Collector’s Edition, which is the one described here.

This version is a steelbook. It also comes with some digital content, namely a retro map pack featuring two maps from Killzone 2, a dynamic theme and a soundtrack. The front shows a close up of a Helghast face, the back shows the Helghast emblem. The entire box also has a worn look, with scratches and busted corners. On the inside we can see some artwork: a scene of a wide environment with spaceships looming above, and a few small figures watching. This looks quite nice, but it’s a shame that the transparent plastic that’s in front of it isn’t completely clear, which makes the image kind of washed out and difficult to see. This is one of the more uninteresting collector’s editions I have seen. I like steelbooks, so that’s not the problem. The thing is that it looks too identical to the Killzone 2 steelbook, which also featured a close up of a Helghast face. But that one actually looked better. For one, the material used here is too shiny, as opposed to the more matte look of KZ2’s. It would have been a lot cooler if only the silver parts on the Helghast’s face would’ve been shiny. But the main problem is the eyes: you can clearly see that it are two orange overlays planted on top of the steelbook. It makes the thing look rather cheap.

The concept may sound nice on paper (a dark box with glowing red eyes) but the actual product just doesn’t look as nice. This collector’s edition could have been a lot better. It’s still a pretty cool design, as the minimalistic look of the box is something that always works. It’s just that the execution leaves a lot to be desired, and it might have been better if it wasn’t so similar to the Killzone 2 steelbook.