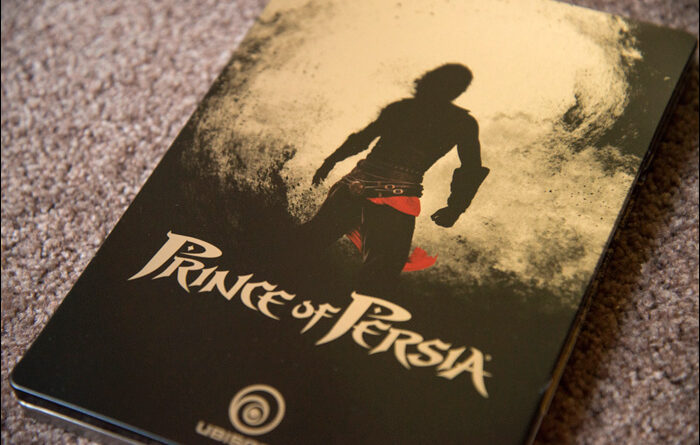 Prince of Persia: The Forgotten Sands was released in 2010 for PlayStation 3, Xbox 360 and PC (other versions of the game were developed by different studios for PSP, Wii and DS). A collector’s edition for the game was also available.

The collector’s edition comes in a steel book protected by a transparent sleeve. The art on the steel book looks pretty cool, using just a couple of colors to achieve a graphically minimalistic cover. In the center, a silhouette of the prince with his bright red adornments flowing in the wind, standing before a background of golden desert sand.

This version comes with two discs: the game itself and a bonus DVD. This disc contains the game’s soundtrack, screenshots, trailers and wallpapers. A soundtrack is always nice but I’m not sure who’s going to watch screenshots on a dvd in this day and age. On the inside of the case you can see an artwork of a Persian palace in the desert. It’s always nice if the inside is decorated as well. Also included is a paper envelope with some ‘lithographies’ inside, containing artworks from the game. This version includes some digital extras as well, most notably a redeem code for Prince of Persia Classic, the remake of the original game that was released in 1989. It’s pretty cool that you get this for free, especially since you usually just get stuff like extra skins or weapons as digital extras with collector’s editions. This limited edition also comes with those, on the other leaflet: a Sand Wraith skin, a Malik skin and an extra mode called Survival Challenger Mode. In conclusion, this edition is not bad, but it’s not exactly spectacular either. For the most part it’s a pretty straightforward, but nice looking limited edition, but the fact that you get an entire arcade game for free is quite generous. A good choice if you can get it for a modest price.