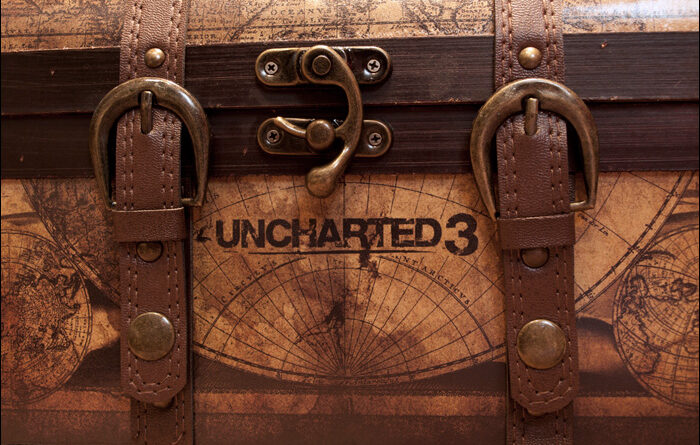 The most expensive, but perhaps also the most valuable game in our collection. Uncharted 3: Drake’s Deception was released in 2011, exclusively for PlayStation 3. A bunch of different special editions were made available: North America got the Collector’s Edition, and the PAL region got the Special Edition and the Explorer Edition. This last one was the most expensive version of them all, and the one shown in this article.

The Explorer Edition is the most expensive game I ever bought: I paid 125 euros for it. But now, it also is one of the rarest and most valuable games in my collection. There are not a lot of them and it was hard to find even before its release date. Now you can still get it on eBay, but prices generally go into the multiple hundreds of dollars.

But let’s see what exactly it contains. First of all, it comes in a impressive looking box, made of sturdy paper and decorated with artwork. Inside this box is the special container that carries all the contents: a wooden travel case that can be used to carry PlayStation 3 games around. It looks very nice, with straps, shiny wood covered in ornaments, and has a classic ‘treasure chest shape’. So let’s open this thing up. Not too shabby. First of all, it includes the Special Edition (the one that was also sold separately in Europe). It’s made to resemble Drake’s journal, with pages containing his notes, scribbles and other clues. The game and the manual are also in there. Then there is a lenticular art card showing Nathan Drake in the middle of the desert in a shootout.

Thirdly, a statue. This one actually looks quite nice. It’s detailed, the colors are just right, and I like how he has a nice looking pedestal so you can easily display him without having to worry about him falling over. Yes, the face could be a little better but it’s definitely not bad. Then there is a belt buckle, the same one Drake uses, that you can wear on you own belt. Lastly, one of my favorite items in there: a replica of Sir Francis’ ring that Drake carried around his neck since the first installment, and that plays an important part in Uncharted 3’s story. It looks pretty convincing, with a nice leather strap so you actually carry it around, and of course it has an inscription of the famous line ‘sic parvis magna’.

All in all this is a nice package. Sure, it may have been quite expensive when it came out, but it seems like the demand was high enough for this to become a wanted collector’s item. As much as it may have cost me, I was actually quite lucky, because the prices people are asking for it now are double that amount or more. Either way, something I’m proud to have in my collection.