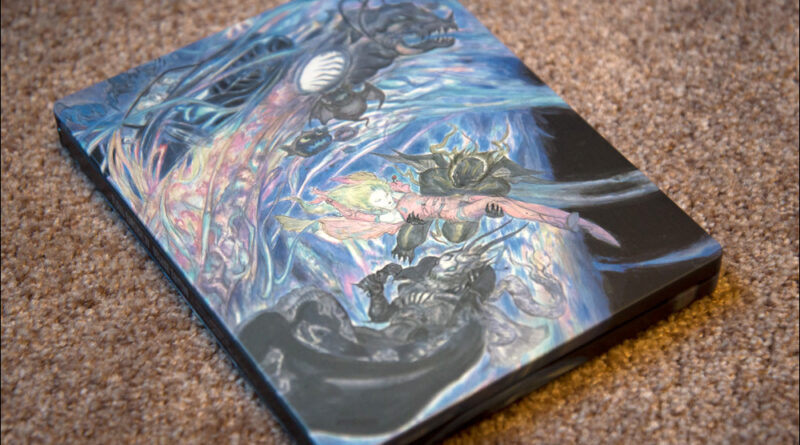 After a turbulent development that spanned more than a decade, Final Fantasy XV was finally released in November of 2016. Several editions were available: a Day One Edition, the Ultimate Collector’s Edition, and a Deluxe Edition. Select retailers also offered a Special Edition containing a steelbook. In this article we’ll take a look at the Deluxe Edition for PlayStation 4. It comes in a steelbook decorated with artwork by Yoshitaka Amano wrapped around both sides. It definitely stands out with its dynamic lines and pastel colors, not something you often see on a boxart. Also included is Kingsglaive: Final Fantasy XV, a computer animated movie that tells the story of King Regis, Noctis’ father. With its runtime of nearly two hours this is quite a substantial bonus. The inside of the case has some artwork as well, showing two different compositions with characters from the game and the movie respectively. Then there is a bunch of inserts. Among them is a booklet advertising other Square Enix games, a code for downloading DLC, a code for registering on the Square Enix website, and a small booklet with the autographs of the development team printed on it. The DLC codes give you access to the Masamune sword, the Platinum Leviathan skin for your in game car, and the Royal Raiment outfit for Noctis.

All in all an attractive looking edition, although with its 89.99 price tag it is somewhat expensive. The lack of a soundtrack CD and art book is a bit of a bummer. It just feels like the publisher could have included a bit more. However, pricing issues aside, this is a very appealing edition to have on your shelf.